The Lone Pine Memorial is at the east end of Lone Pine Cemetery. The Anzac and Suvla cemeteries are first signposted from the left hand junction of the Eceabat – Bigali road. From this junction you should travel into the main Anzac area. At 7.6kms., take a right turn to Chunuk Bair and initially take the road to Kemalyeri. At 10.3kms, Lone Pine will be found on the left. Lone Pine Cemetery stands on the plateau at the top of Victoria Gully.

The Cemetery is permanently open and may be visited at any time. Wheelchair access to the cemetery is possible via the main entrance.

Please note that in the absence of a cemetery register, visitors are advised to locate the Grave/Memorial reference before visiting. This information can be found in the CASUALTY RECORDS on this page.

The eight-month campaign in Gallipoli was fought by Commonwealth and French forces in an attempt to force Turkey out of the war, to relieve the deadlock of the Western Front in France and Belgium, and to open a supply route to Russia through the Dardanelles and the Black Sea.

The Allies landed on the peninsula on 25-26 April 1915; the 29th Division at Cape Helles in the south and the Australian and New Zealand Corps north of Gaba Tepe on the west coast, an area soon known as Anzac. On 6 August, further landings were made at Suvla, just north of Anzac, and the climax of the campaign came in early August when simultaneous assaults were launched on all three fronts.

Lone Pine was a strategically important plateau in the southern part of Anzac which was briefly in the hands of Australian forces following the landings on 25 April. It became a Turkish strong point from May to July, when it was known by them as ‘Kanli Sirt’ (Bloody Ridge).

The Australians pushed mines towards the plateau from the end of May to the beginning of August and on the afternoon of 6 August, after mine explosions and bombardment from land and sea, the position was stormed by the 1st Australian Brigade. By 10 August, the Turkish counter-attacks had failed and the position was consolidated. It was held by the 1st Australian Division until 12 September, and then by the 2nd, until the evacuation of the peninsula in December.

The LONE PINE MEMORIAL stands on the site of the fiercest fighting at Lone Pine and overlooks the whole front line of May 1915. It commemorates more than 4,900 Australian and New Zealand servicemen who died in the Anzac area – the New Zealanders prior to the fighting in August 1915 – whose graves are not known. Others named on the memorial died at sea and were buried in Gallipoli waters.

The memorial stands in LONE PINE CEMETERY. The original small battle cemetery was enlarged after the Armistice when scattered graves were brought in from the neighborhood, and from Brown’s Dip North and South Cemeteries, which were behind the Australian trenches of April-August 1915.

There are now 1,167 Commonwealth servicemen of the First World War buried or commemorated in this cemetery. 504 of the burials are unidentified. Special memorials commemorate 183 soldiers (all but one of them Australian, most of whom died in August), who were known or believed to have been buried in Lone Pine Cemetery, or in the cemeteries at Brown’s Dip. 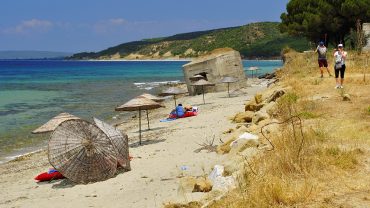 As the sun rises over Anzac Cove in Gallipoli on the...

The town of Canakkale, being located between the Aegean Sea and...